The goal of this four-part series is to provide foundational knowledge on how to use Flows in Salesforce. Flows are a powerful tool for automating processes in Salesforce and are something that every Salesforce Administrator or Consultant should be familiar with.

At a high level, a flow involves a few basic concepts:

Salesforce Flows are declarative, which means they do not require writing code to set them up. This makes them readily accessible to Administrators and Consultants who have not learned how to write code. Salesforce continuously adds features to Flow Builder, so it can do many things that were once impossible without code.

Flows are built with a series of elements connected to one another. When a flow is triggered to run, it works its way through the elements one at a time and performs different logic and actions based on which element is used and the way it is configured.

In this series, we will discuss all of the elements available to work with in the Flow Builder.

In Flow Builder, there are three groups of elements: Interaction, Logic, and Data.

The Data Elements reach out from the flow instance and interact with Salesforce data, allowing the flow to retrieve information from or make changes to records in the database.

The Create Records element allows you to create new records in your Salesforce org’s database. It can be used to create one or multiple records.

When creating one record, the simplest way is to select “Use separate resources, and literal values.” Choose the type of object you want to create a record for, and assign the field values you want the new record to have.

Once the record is created this way, you also can reference the newly created Record ID in other flow elements.

In this example, we created a new Account Record for Venn Technology: 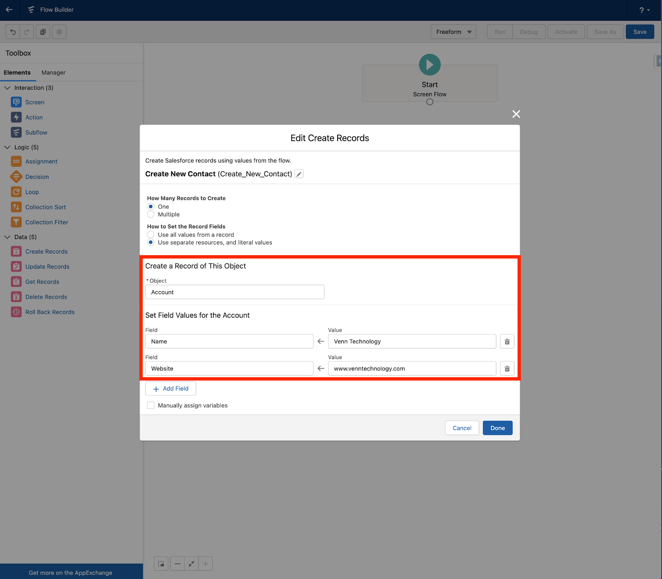 You can also reference a record variable or collection of records used previously in the flow and create a new record using the values that were set previously. This is the only way to create multiple records with one Create Records element.

It is also similar to the Get Records element in that you are able to filter for the records you want to update when you use the “Use separate resources, and literal values” option. When filtering records this way, be aware that the Update element will revise all records in the database that meet the criteria, so it’s a good idea to be as specific as possible with your filters.

Alternatively, you can select “Use the IDs and all fields from a record or record collection” to update a record that was previously stored in the flow, such as one from a Get Records element. In this case, to make changes to the values on that record, you should have done so previously in the flow using the Assignment element.

In this example, we use the Update Records element to update the MailingState field of all contacts in the system that have an AccountID field value of “0014T000008zal9QAA.” If we only wanted to update a single contact, we would need to add more filters, such as the Contact ID, or FirstName and LastName fields. 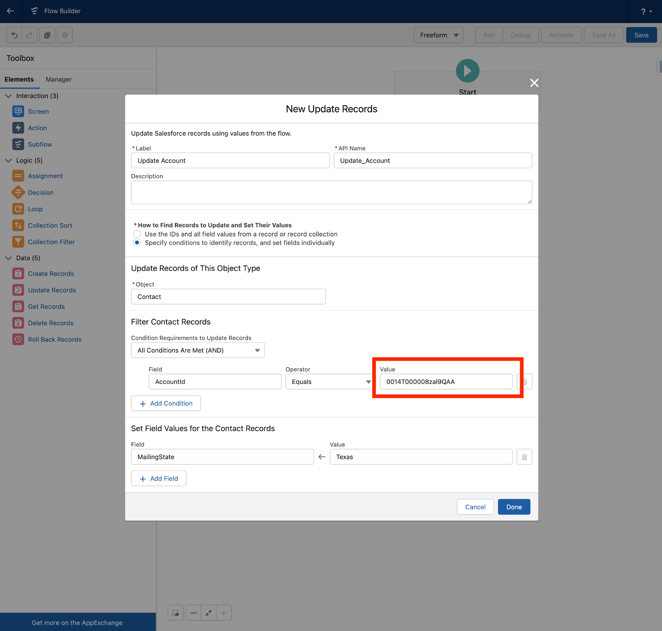 The Get Records element is used to “get” one or more records from the database based on filter criteria set in the component. Getting a record stores its values within the flow, as well as the values of records it looks up to (such as a Contact record looking up to an Account record in its AccountID field), allowing you to reference it in other flow elements and resources.

The filter criteria is based on values found on the specific record you’re getting, such as the ID or name of an account. Multiple criteria can be used, and the condition requirements can be set using “and,” “or,” or custom logic. When getting your criteria, the filter logic should be as specific as possible (such as an ID value), so that you only get the records you want to work with.

Get Records can be set to retrieve either the first record that meets the criteria, or all of the records that meet the criteria. Multiple records are stored together in a collection.

In the example below, this Get Record is retrieving the first account with a value of “Venn Technology” in the Name field and storing it for use in the flow. 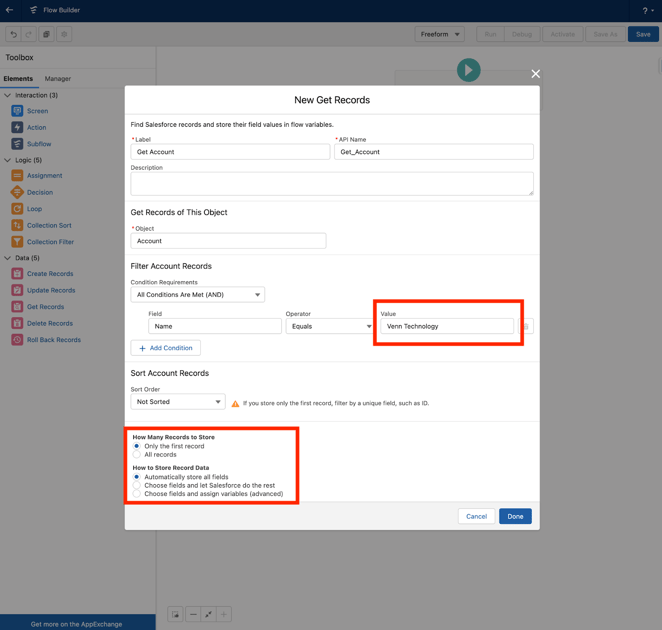 In this example, we use the Delete Records element to delete an account with the Id of “0014T000008zal9QAA.” By using the Id field in the filter, we ensure that only this specific account record is deleted. 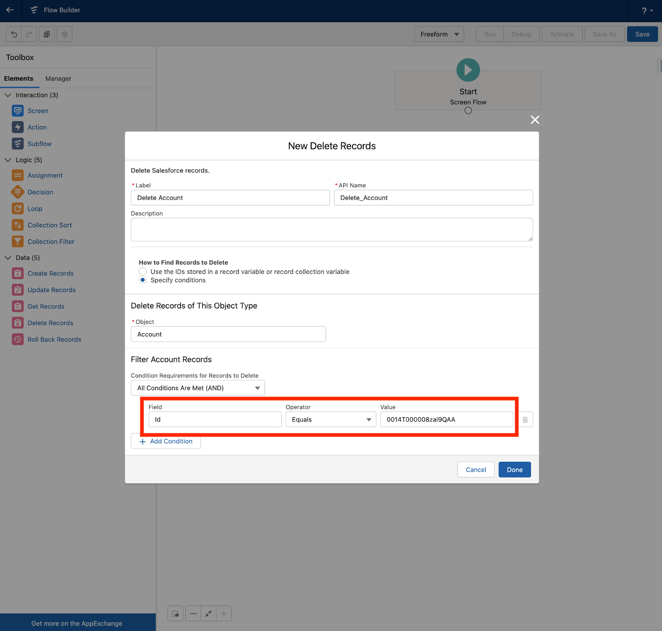 The Assignment element is one of the Logic elements, which means that it does not directly affect the contents of the Salesforce database. Instead, it is used to interact with records and resources within the flow by changing, adding, or subtracting the values of variables and fields. This is very useful for setting or changing record values before creating or updating them, and for using variables to perform logical functions.

Below, we use the Assignment element to change the StageName field of an opportunity to Closed Won and set the CloseDate field to today’s date with {!$Flow.CurrentDate}. This does not update the Account field in the database yet, but does set the values in preparation for the Data elements. 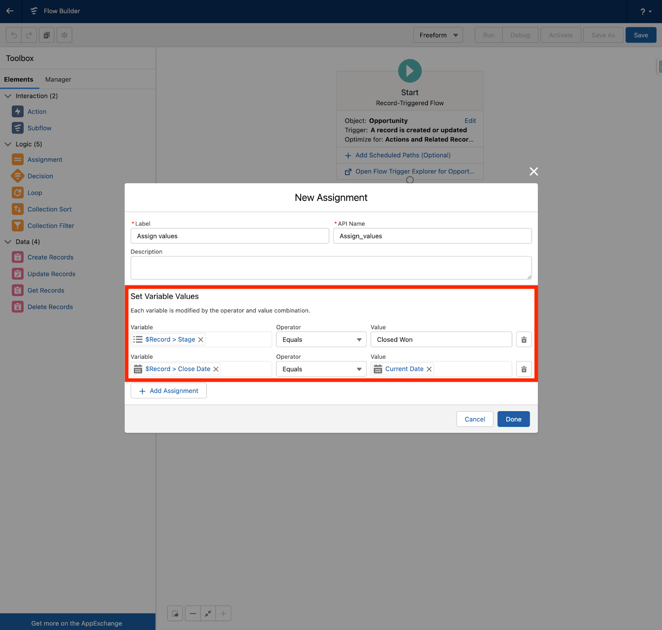 The Decision element is one of the most important elements in the Flow Builder, as it allows for the creation of multiple paths based on various criteria, allowing a single flow to output different results based on decision criteria.

When creating a Decision element, set the name and criteria for one or more outcomes. If the criteria is met in the flow, then the flow will follow the path for that outcome. If none of the criteria for the created outcomes are met, the “Default Outcome” is followed.

In this example, we create a Decision element that checks if the Opportunity record’s StageName field value is Closed Won. 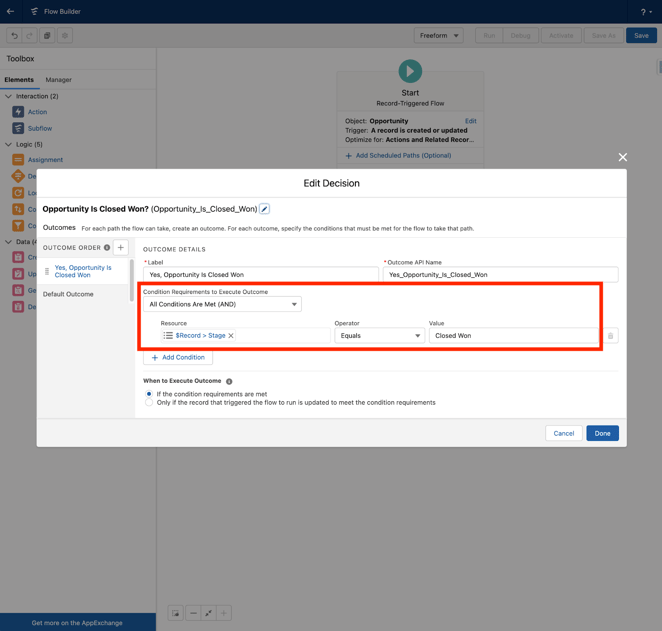 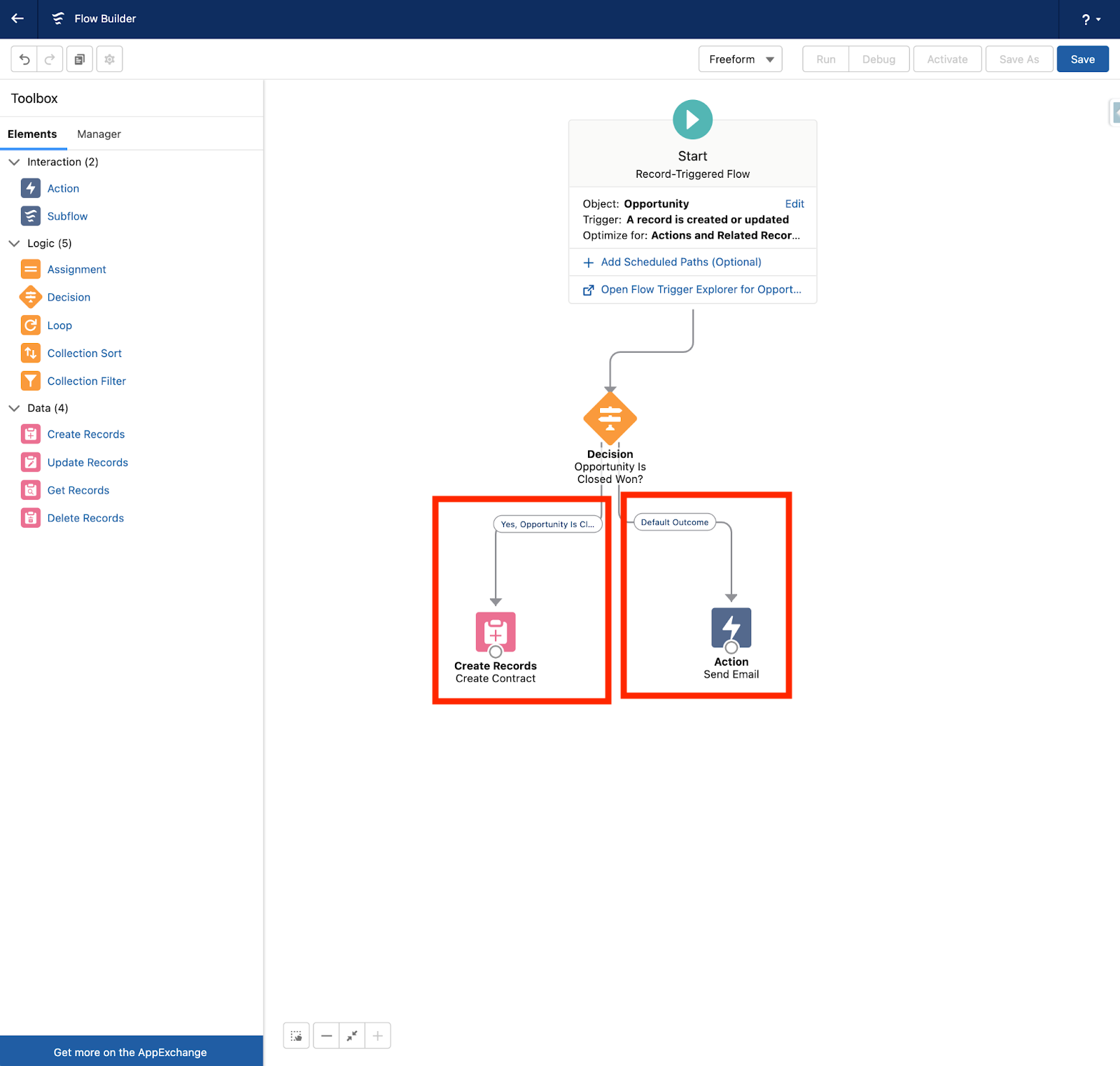 Now that you know how to use the Data, Assignment, and Decision elements, here are some tips and tricks when using them.

Using a Decision after a Get Element

The Get Records element will not error out if it does not find anything with the filter criteria provided, but if later elements in the flow attempt to reference the record when there is not one, those elements may cause an error.

Here, we check to see if any Opportunity Products were found in the previous Get Records element: 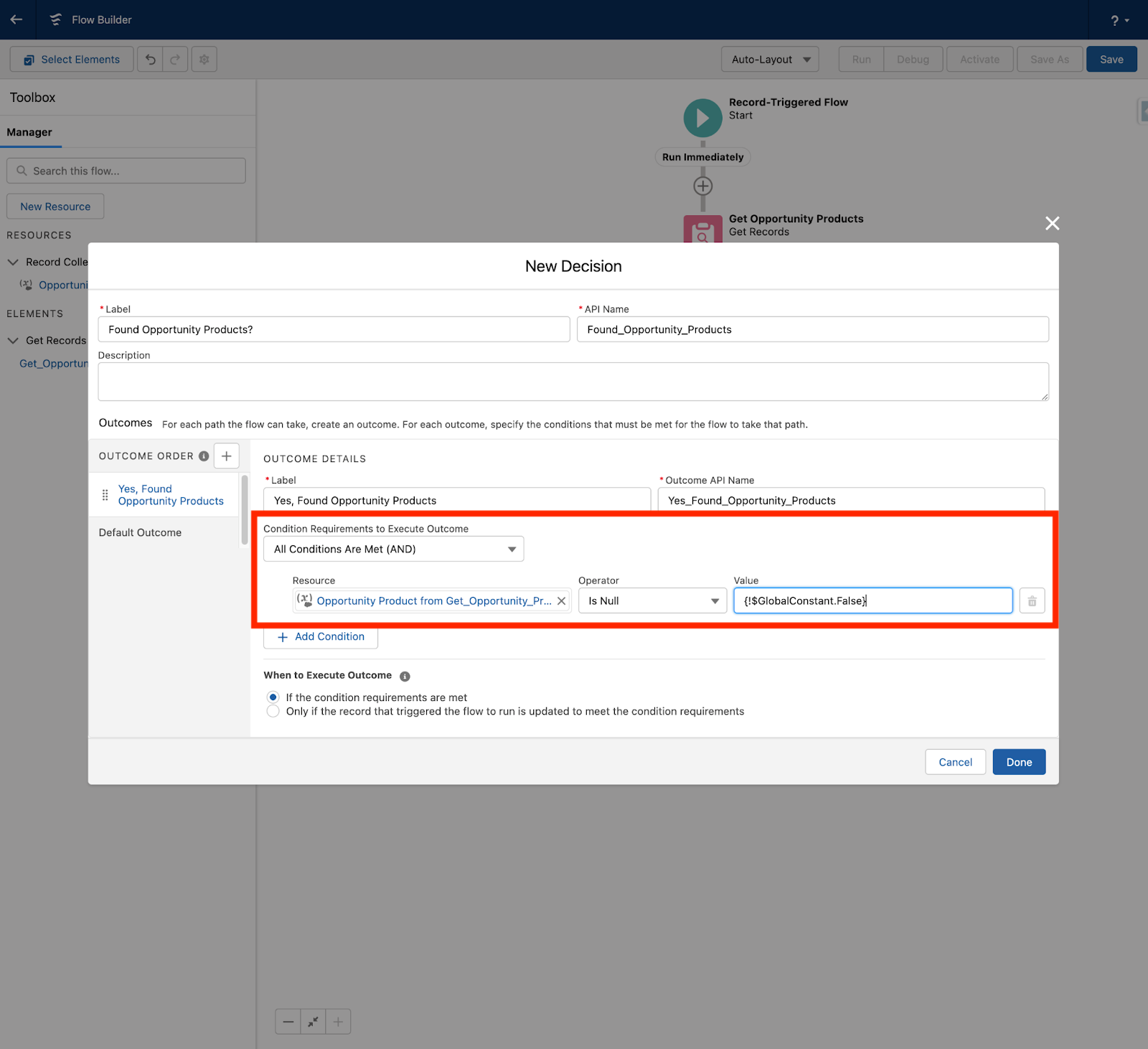 If the variable is null then the record was not found—the default path is followed and the flow ends. If records are found, the flow continues.

In this example, the flow checks for Opportunity Products, updates them if the flow finds any, and if none are found, the flow ends: 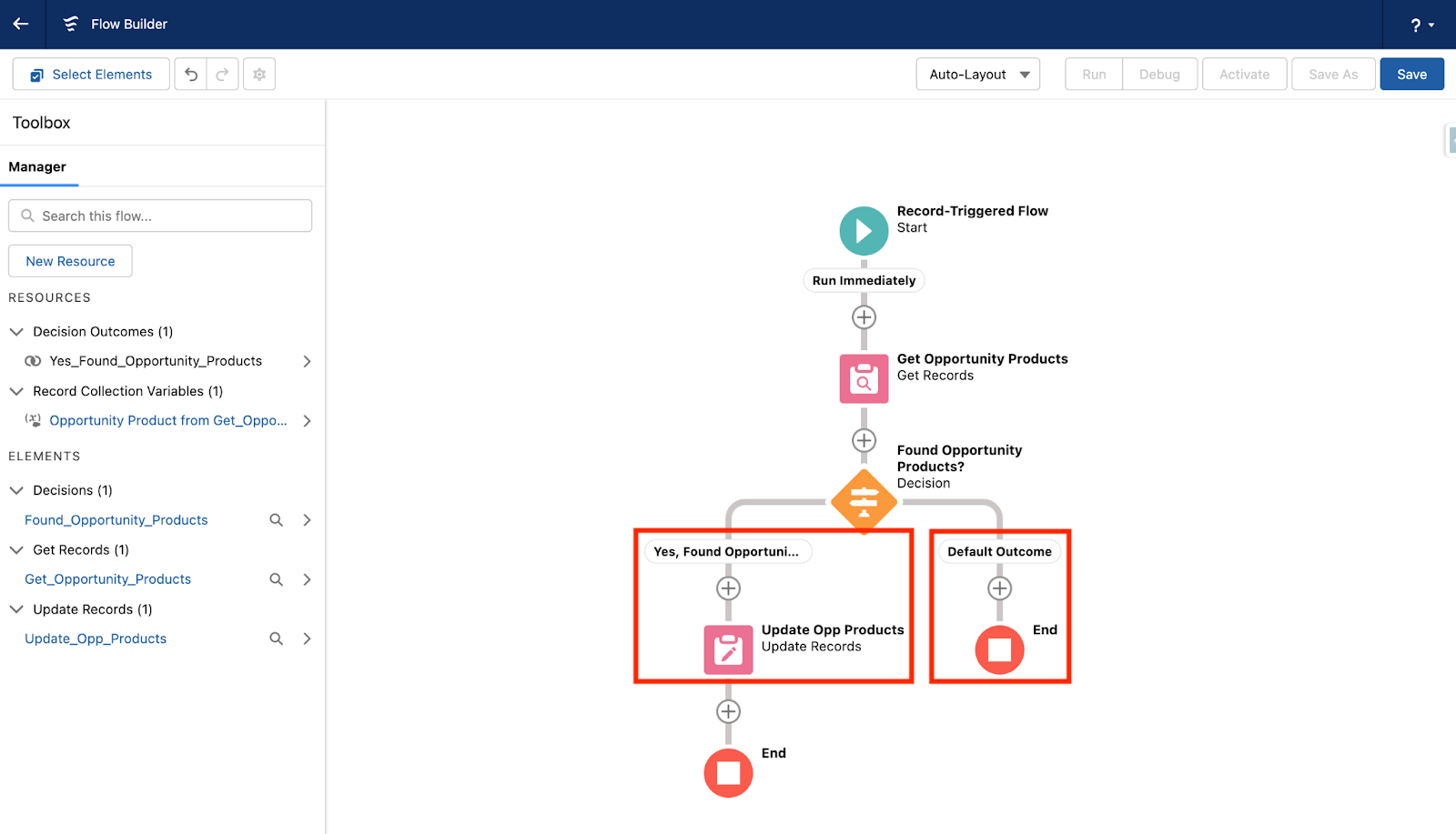 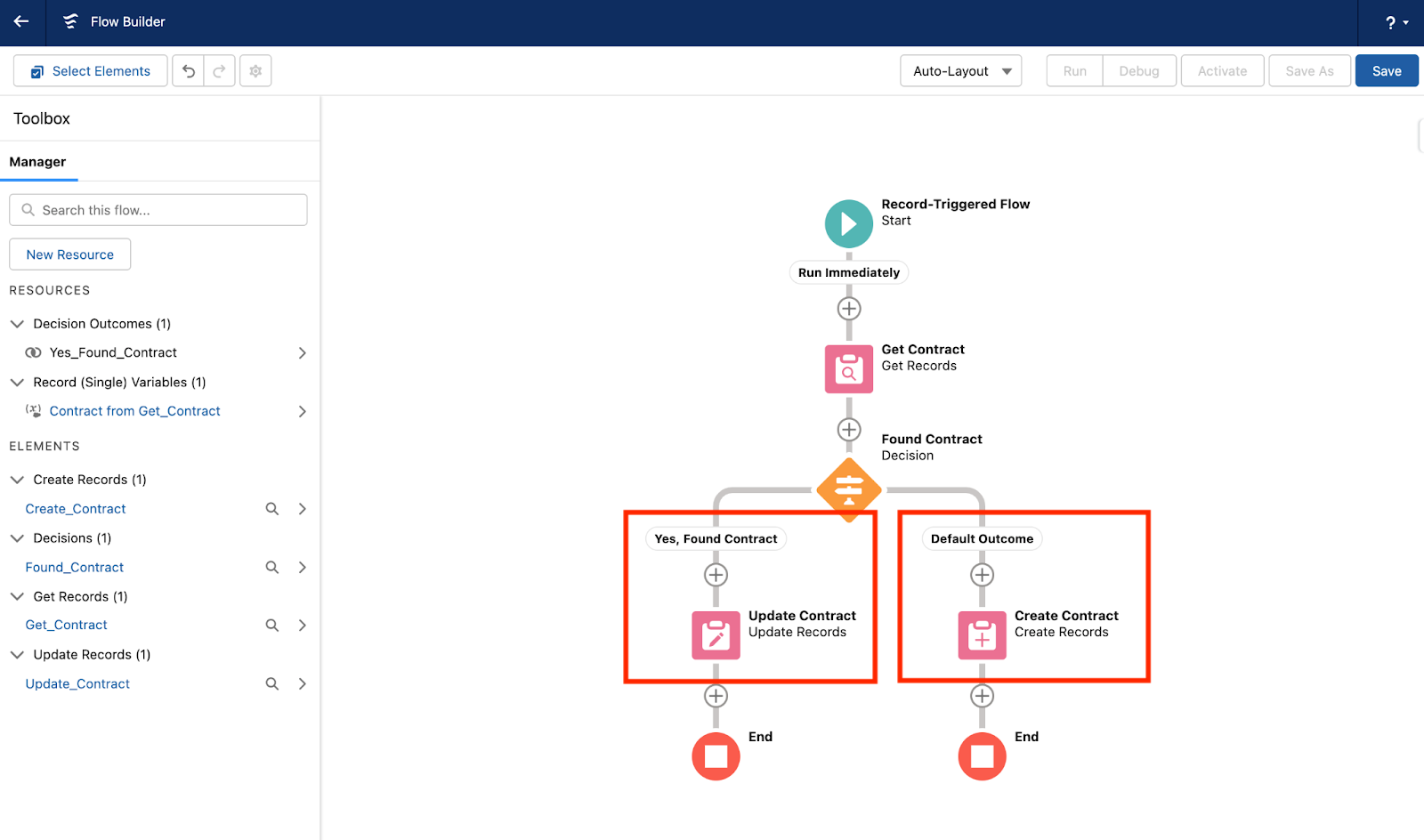 The outcome of a Decision element is stored in the flow as a boolean (true/false) value that can be referenced later on in the flow by other decisions or formula resources.

This can be useful in various situations where a decision was made previously in the flow that you want to reference later.

Below you can see: 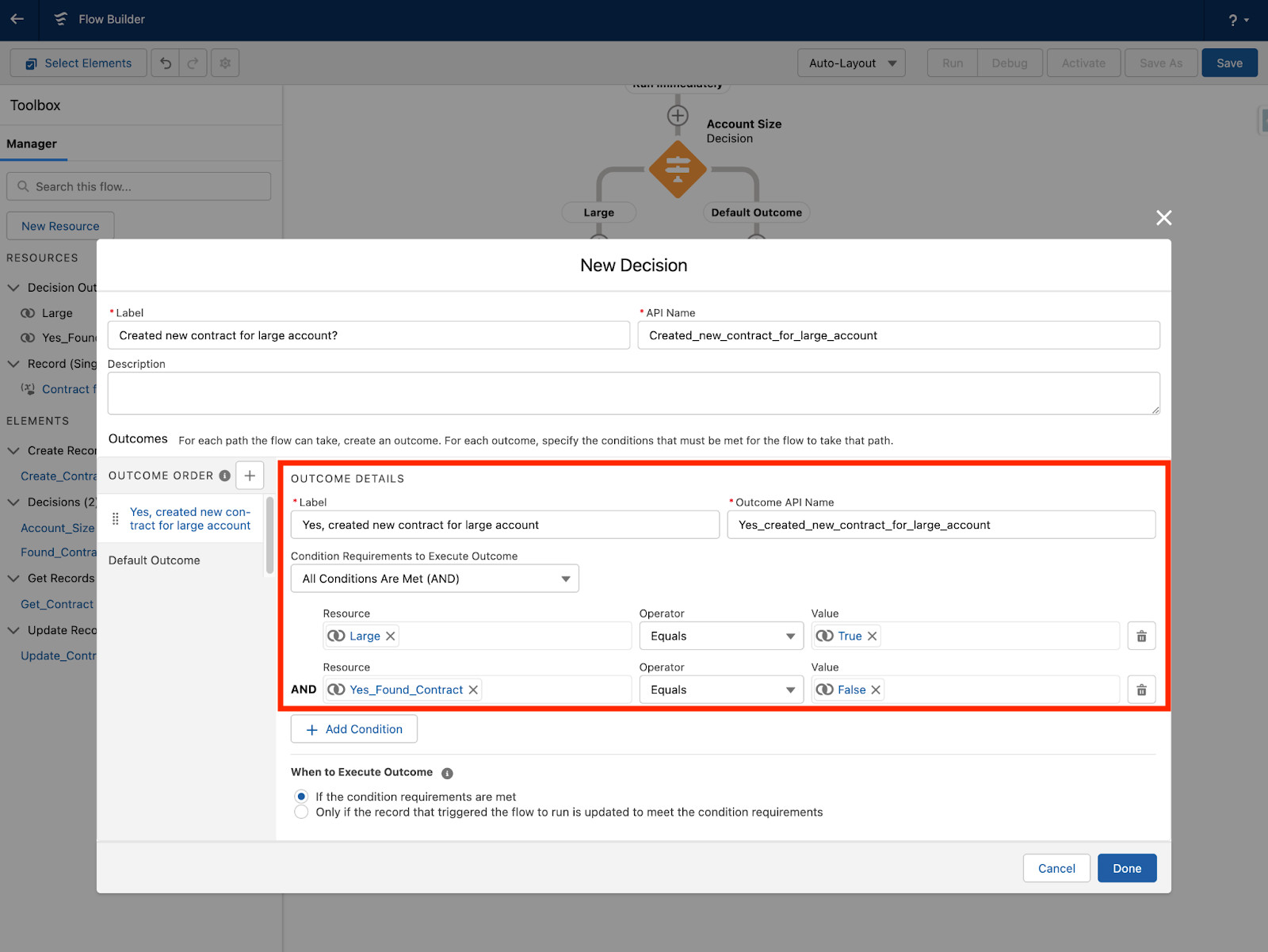 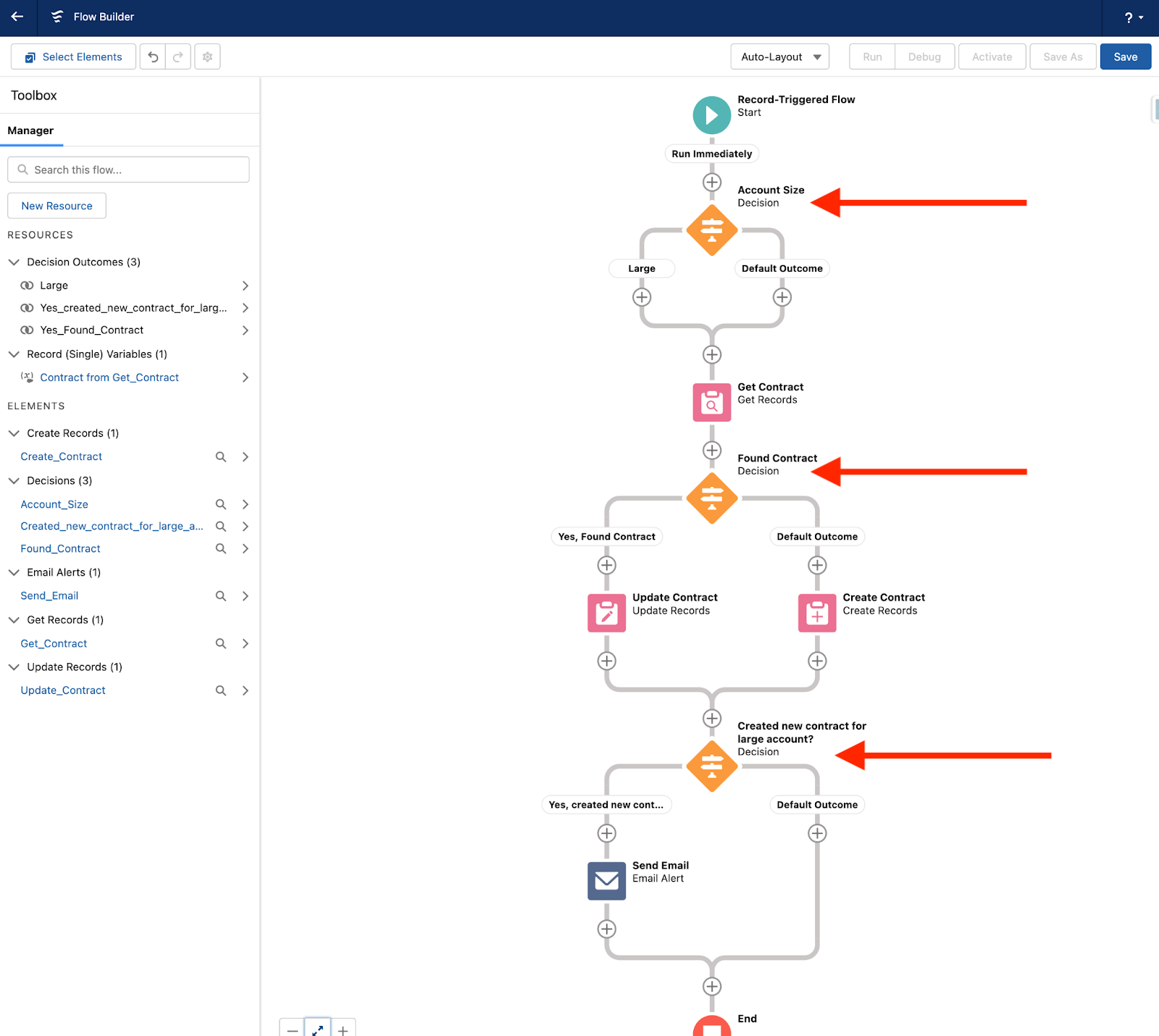 For more information on Salesforce Flows, check out our next blog post: Flow Element Basics Pt. 2 – Variables, Collections, and Formulas. 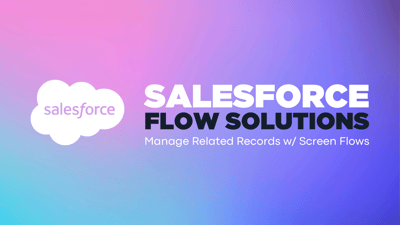 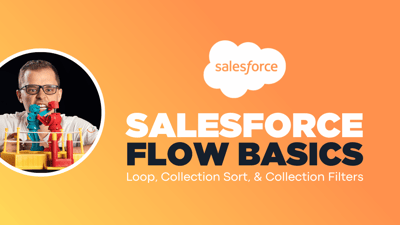 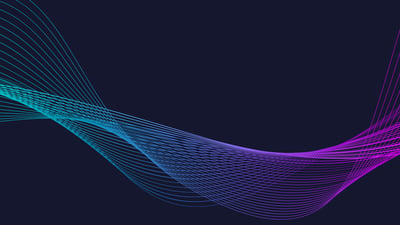 How do I start a career in the Salesforce ecosystem?